Balsam Fir (Abies balsamea). Of our Northern conifers, the scent of balsam is arguably the most evocative, reminding many of us of Christmas trees or a hike in the woods. Here in Maine a common souvenir for tourists and locals alike is a small pillow or sachet filled with its fragrant dried needles. There are many uses for balsam fir but today I want to share one of my favorites: infusing balsam fir into jojoba for a fragrant treat for your skin and hair.

It is important to properly identify a plant before using and of course that applies to balsam fir too. You can find plenty of good identification information on the internet, on certain plant ID phone apps, or in field guides for identifying trees. Most evergreens are safe to use but not all, so please be sure you know what you are using. You can harvest balsam fir at any point in the year. From spring into early summer here in Maine balsams put out their new growth at the tips, easily identified by their bright shade of green. When gathering balsam boughs for infusing, be judicious in how much you take from any one tree and certainly avoid any trees that might have been sprayed with pesticides or other chemicals. For a jojoba infusion you’ll use the needles and the smaller stems at the end of a bough. 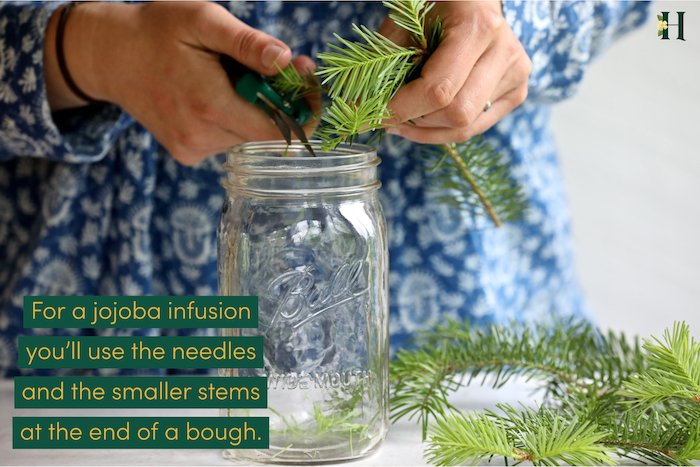 Balsam fir infused jojoba can be made from freshly gathered material or you can leave it to dry out for a day or more after gathering before you make your infusion. If you’re gathering this time of year (here in the Northern Hemisphere) those light green new growth tips have a brighter, more lemony scent (to my nose anyway) than older growth needles and your resulting infused jojoba will reflect that seasonality. If you end up really loving your balsam jojoba infusion, I recommend trying to make some in different seasons (it’s nice to gather botanicals in winter while the rest of the plant world sleeps) and comparing the scent profiles of the finished product. 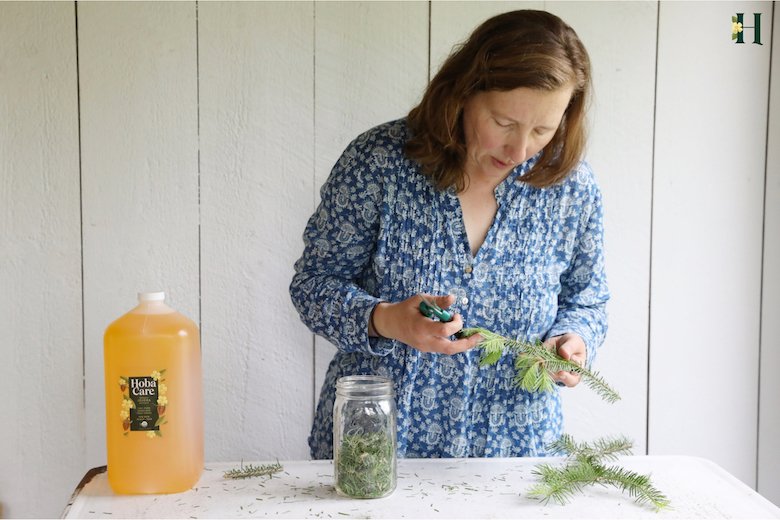 After I gather balsam boughs, I work with a section of bough about a foot long at a time and carefully inspect the needles and stems for any foreign material (an errant cobweb, leaves or other detritus from neighboring trees) and remove any yellowed or brown needles. Once I’ve thoroughly gone over this section of balsam fir, I take a small pair of garden snips (use whatever is comfortable in your hands-pruning clippers or small shears work fine too) and cut the needles and stems into a very clean (preferably sanitized) glass jar. You can keep the balsam in larger pieces as they go into the jar if you prefer but the more surface area you expose to the jojoba, the sooner the jojoba will take on that delicious balsam scent. I like snipping the needles in half parallel to the stem so that every needle is at least cut in half, and then cutting the balsam stems into small pieces. There are infinite proportions of balsam fir to jojoba that you could use but the simplest method is simply to fill the jar you’re using loosely with balsam fir (I don’t recommend packing the jar too tightly with needles/stems) and once filled, pour jojoba slowly into the jar, poking a clean knife or other object into the jar to remove any air pockets and ensure that the jojoba has dispersed throughout. Once the jojoba comes to the top of your jar, make sure the fir is submerged, and cover. You can keep this jar in a dark cupboard or anywhere out of bright sunlight while it infuses and when you think of it, give the jar a good shake (daily is ideal). 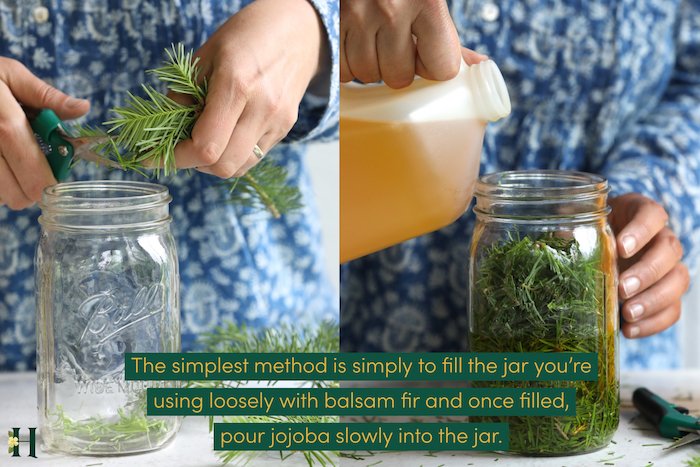 How long you infuse your jojoba with balsam fir is completely up to you. The beauty of using jojoba in herbal infusions like this is that thanks to its shelf stability you don’t have to worry about your finished product going bad (provided you’re using dried material or material with low water content like balsam fir). If you want to speed the infusion process up you can add gentle heat without worrying that the heat will degrade the jojoba (another benefit of jojoba over other carrier oils that can degrade with added heat). I recommend infusing your jojoba for at least 4-6 weeks at room temperature, checking every few days to see how you like the scent. If you want to speed up the process you can put the balsam jojoba in the top of a double boiler at very low heat for a few hours, making sure it doesn’t ‘cook’ the needles and stems, or you can set the jar in a slow cooker filled with water that comes at least halfway up the outside of your jar on low heat to gently infuse. Again, the key is to check on your infusion to make sure it doesn’t get too hot and to stop the infusing when the jojoba has that delicious balsam scent. 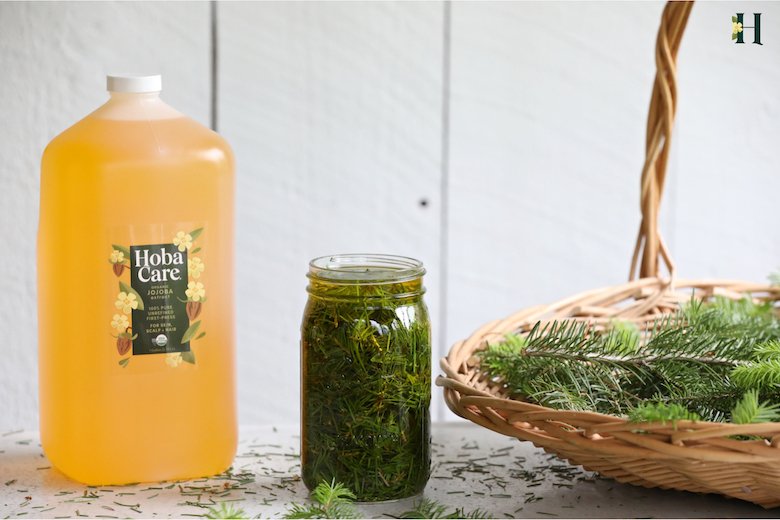 Once you’re happy with your infusion’s fragrance, strain out the balsam from the jojoba. I like to strain twice, once through a fine mesh colander to get the bulk of the balsam out and then again through a piece of finely woven unbleached cotton or a coffee filter to remove anything other than jojoba. Transfer your infused balsam jojoba into a clean bottle and enjoy! What can you do with balsam fir infused jojoba? First and foremost, use it on your skin and hair to impart that wonderful balsam scent as well as to moisturize and condition. (As with all new products, be sure to patch test your infusion as there are infrequent cases of people having sensitivities to balsam.) Balsam jojoba makes a delightful beard oil. I like to work a little bit into my hair for gloss, conditioning, and, again, that smell! You can read a lot of information online about balsam fir’s potential benefits to the skin and to health. I recommend starting here and here . We don’t make any claims here at The Original Jojoba Company but purported benefits may include aiding the circulation system when rubbed into the skin, as an aid for colds/bronchitis if the infused oil is rubbed into the chest (many conifers have an affinity for the respiratory system), and to relieve sore muscles. Of course the aromatherapy benefits of balsam fir are not a small part of its appeal! 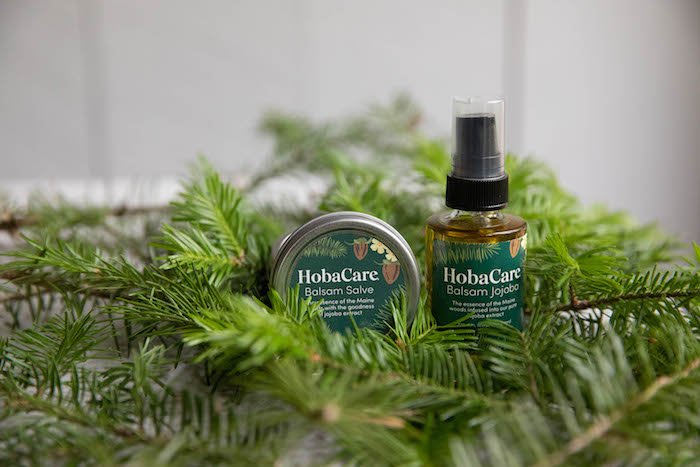 We hope this inspires some of you reading to try making your own balsam infused jojoba. If you make your own or try ours, we’d love to hear what you think! 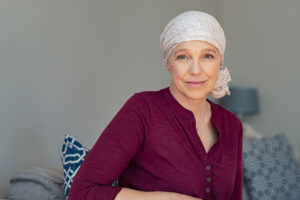 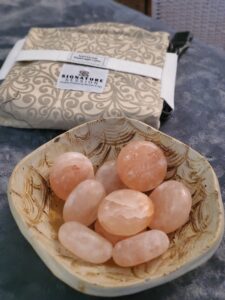